Last Sunday we had our monthly sketchcrawl and it was a unique event.  We gathered at the main Quebec City library, in a large room associated with their art collection.  We were tasked with finding a painting we liked and then doing our own take on the subject matter.  There were, I think, nine of us and we had a lot of fun, particularly because we were all in the same room so we could talk.  I tend to go silent when I sketch but I took breaks to see what others were doing.

I chose a large watercolor of a bunch of kids playing in tide pools, thinking I could turn it into a fun sketch.  I started by blocking out the locations of the kids, indicating the horizon and generally getting the sense of what I wanted to do.

Then it happened.  I decided that rather than starting to draw with my fountain pen, I’d indicate the shadow areas to begine to define the kids.  This led to adding some color and I was like Alice falling into Wonderland as things quickly went out of control.  The first thing I realized was that converting a large (22×30 painting) into a 7×10 sketch wasn’t consistent with the amount of detail I was planning and so some reassessment took place.  That wasn’t so bad as my skills with a a fuzzy stick leave much to be desired.  I was really wishing I had my fountain pen in hand rather than a fuzzy stick.

But I persisted, doing things for the first time at every turn.  Still, the sketch started to look suspiciously like kids in tide pools so I convinced myself it wouldn’t be that bad.  Eventually, as a last step, I did get out a fountain pen and added some lines and details, though I kept things a bit vague.  I learned a lot, including how much I need to learn about watercolors.  While it was frustrating at times, it was also a lot of fun.  Maybe I’ll figure out fuzzy sticks eventually.

I had a hard time scanning this one.  I suppose it was because of all the very pale blues in the sky and water but I gave up and took this cell phone photo of it.  The colors aren’t quite right and the lighting isn’t even, but you can get an idea of what it looks like, I think. 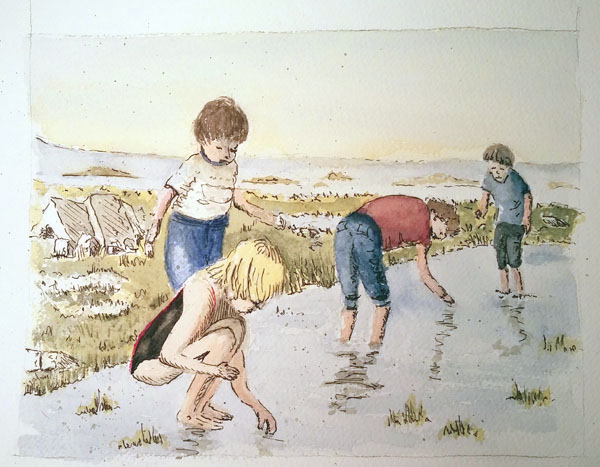 6 Responses to “A Street Sketcher Tries To Paint”