To both of you who follow this blog, I apologize for my absence.  It’s embarrassing to admit but without my laptop I’m dead in the water, and I had a hard drive crash late last week.  I got the problem diagnosed by Friday night and then began waiting for a hard drive to arrive in the mail.  This is not something you want to be doing as the weekend is just beginning.

So, I scuttled around in my basement and, using ancient computer parts, cobbled together something that looked like a computer and ran almost as fast as an abacus.  But it did get me email and limited web access.  The drive arrived on Tuesday and I’m now back in business  Thank goodness for backups as not much was lost except for a lot of time. 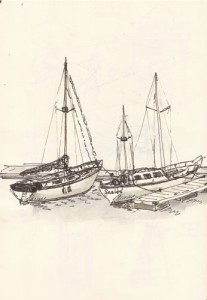 During that time I went for a long sketching walk.  First stop was to do a quick sketch of sailboats in the harbor.  Me and sailboats don’t get along well, mostly because I don’t know much about the rigging and doo-dads that encrust the top surface of sailboats and, from my distant vantage point, these things are hard to make out.  But I continue to try and this sketch consumed ten minutes of my time.  The fact that I was standing up didn’t help much.  I do wish I could get better at sketching while standing 🙁

I wandered around downtown for a while and then got the notion to head to Levis as the sun was out and I always look for an excuse to ride the ferry.  On my way over I recalled a small, but rather ornate house I’d seen while I was in Levis sketching with fellow sketcher, Yvan.  This is it.  The people got sort of faked in using people who were walking by.  I ran out of room while adding the woman and I’m not sure she has a left arm.  If she does, it’s somewhere in the guy’s right side (grin). 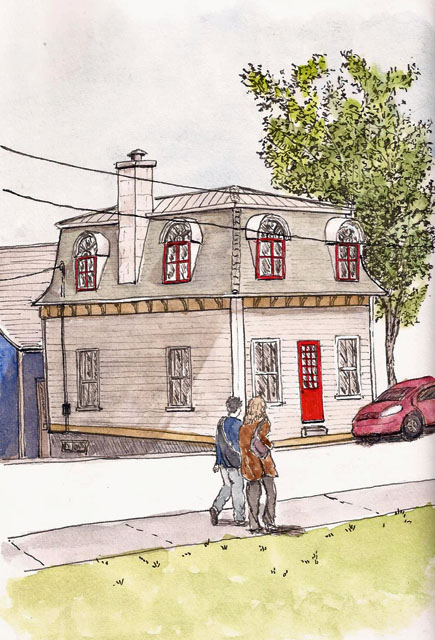 One Response to “A Short Trip To Levis”