My daughter returned to school last week but before she did we spent one morning wandering around old Quebec City,  enjoying an unseasonably warm day.  We sat down near City Hall in the new fountain area south of the building and while we chatted, I did this quick sketch. 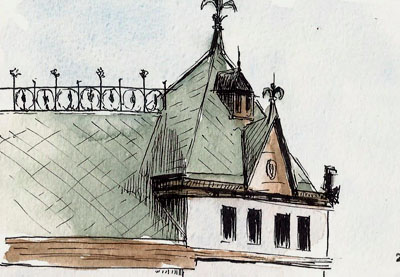 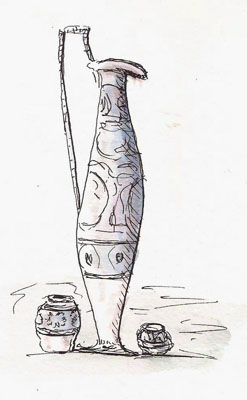 We continued walking, talking and generally wasting time until hunger took hold.  We decided to head to one of my favorite spots for lunch, McDonalds.  Not any old McDonalds as I’m not particularly fond of the food, but rather the McDonalds on St. Jean street, where you can sit in a window on the 2nd floor and look out at great scenes and down on lots of tourists.  I’ve done a lot of sketches from this perch (their coffee ain’t bad).  On this day, since I didn’t want to spend a lot of time ignoring my daughter, I did a simple sketch of the window contents across the street.  The pitcher was tall and very striking.  I doubt I did it justice in the few minutes I spent on it.

My daughter was supposed to meet someone downtown in the afternoon and so eventually we split up and I headed home.  On my way I found that the Levis Marathon, an annual event, was finishing up.  I decided to quickly sketch some of the spectators lined up along the receiving path the runners took to the finish line, along with the proverbial guy who feels the need to climb up on the fence to be above everyone else. 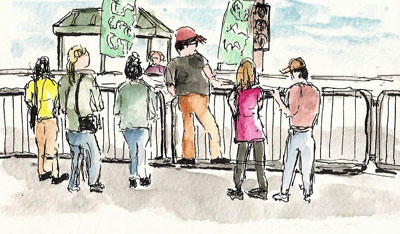 It was a good day.  Not a lot of sketching but just enough.  In writing this I’m realizing just how far behind I am in blog posting as this day took place more than a week ago.  I’ll try to get caught up ‘real soon.’