People say that getting “out of your comfort zone” is a good idea.  So, I drive twice the speed limit, drink excessively and pick fights with NFL players.  Just kidding…maybe that isn’t what they mean, though in the art world these catch-all phrases are ill-defined and hold little real meaning.

But this week seems to be a week where I’m doing things different from my norm and a couple days ago Yvan suggested that we do a ‘real’ sketchcrawl, where we go to a spot, sketch something quickly and then move on to the next spot, repeating until the day got too hot to continue, or until Larry got completely frustrated (grin).

And that’s exactly what we did.  We hopped a bus and headed to a neighborhood where we’d never sketched and decided that we’d walk until one of us (took turns at that) decided it was time to stop.  There, we would choose a subject and spend only a few minutes capturing the scene.  Easy peasy, right? 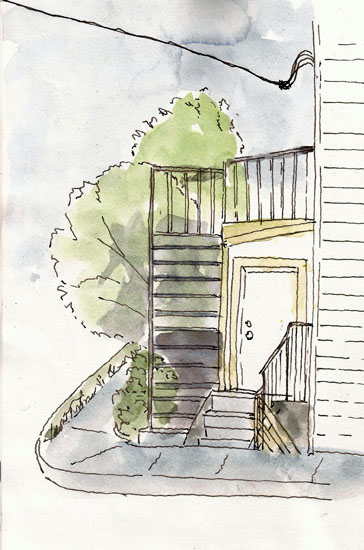 For Yvan it was.  He’s a superb sketcher and with decades of experience, he’s also really quick when he needs to be.  Me, not so much.  I’m still vying for the “slowest sketcher on the planet” award and I think I’m still in the lead.

When I start sketching quickly all sorts of things go wrong as I lose control of linear perspective, proportions, and relationships.  These things cause my sketches to be barely recognizable as the scene before me.  But heck, I was out of my comfort zone.  That has to be good, right?  These are three sketches I came up with during our quick-sketchcrawl session. 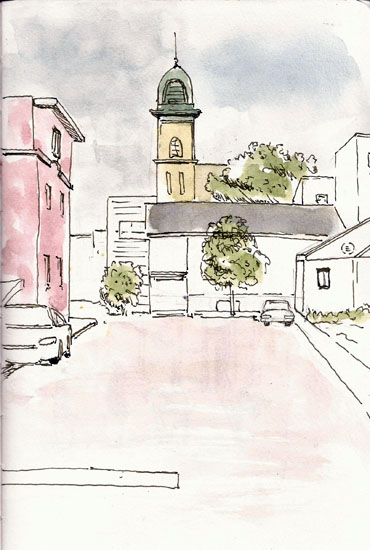 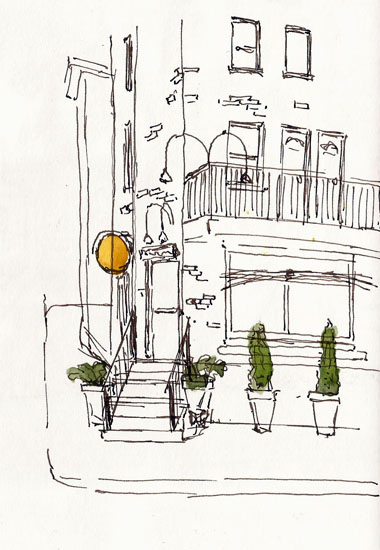 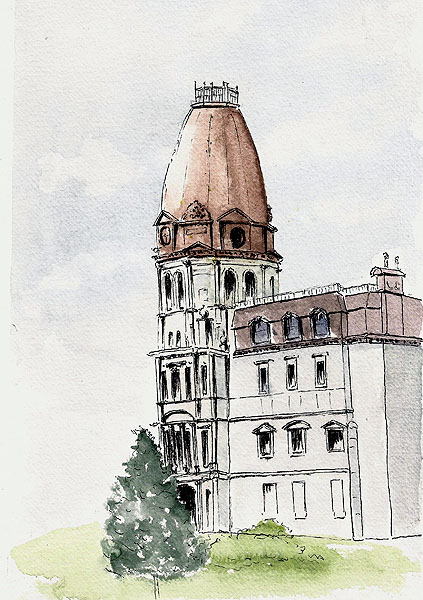 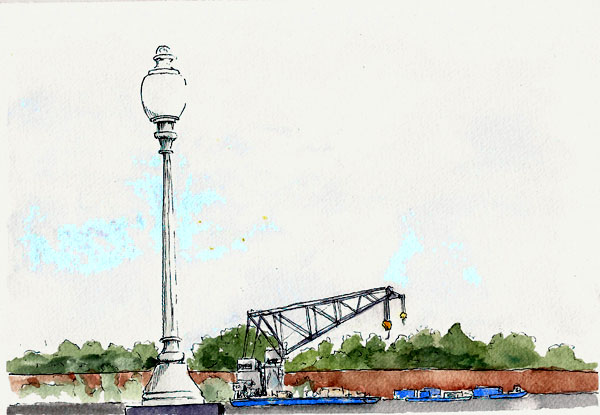 Hubert, a member of our Tuesdays group, arranged for us to sketch at the Morrin Center.  This is an anglophone service center that holds lots of wine-drinking soirees and has a wonderful old library, with leather-covered tables, beautiful old railings and stairs, and an ambiance that can’t be beat.  The building itself used to be a women’s prison and they’ve retained a couple cells in the basement in their original form.  I think you could fit all the anglophones who live in Quebec City into this building and still have room for the wine (grin).

I decided to draw a bust that was sitting in front of one of the windows.  It wasn’t a particularly good cast but I liked the guy’s beard and mustache, which gave me ample opportunity to drive my Pilot Falcon around in my Stillman & Birn Beta (8×10) softcover book.  I’ve thought about adding some watercolor shading and may do that but I haven’t found the time.  Sorry. 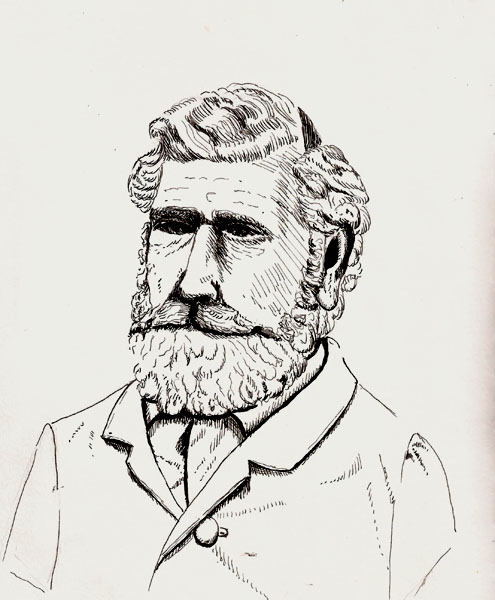 Our next sketchcrawl should be a lot of fun.  It will also be warm, something that’s hard for us to achieve during the Quebec winter.  Yvan has arranged for us to gather at the Artothèque de la bibliothèque Gabrielle Roy.  This is the art collection owned by the Quebec library system.  They have agreed to host us, provide a room, and maybe even some easels to hold art while we draw from it.  We’ll meet on Sunday, February 12th at 9:30 on the second floor of the Gabrielle-Roy library.  You can get details on the Croquistes de Quebec website.

Yvan and I went there last week to see how things would work out and we had a ball.  Drawing from the work of other artists is a time-honored way of learning and I do it a lot, mostly by drawing pieces of sketches of sketches I like in an attempt to understand how the artist made the marks and what they were thinking when they did it.

On this day, however, I hopped a train to fantasyland.  Instead of my normal fountain pen tool, I picked up a brush.  I did a watercolor portrait, based upon a painting by Marie Leberge.  The work itself violated my detail-oriented approach and certainly, my lack of skill with watercolor and brush showed through.  Even so, I had a ball doing it and learned a lot.  I sure missed my pen, though (grin).  Anyways, be at this sketchcrawl.  We’ll have fun. 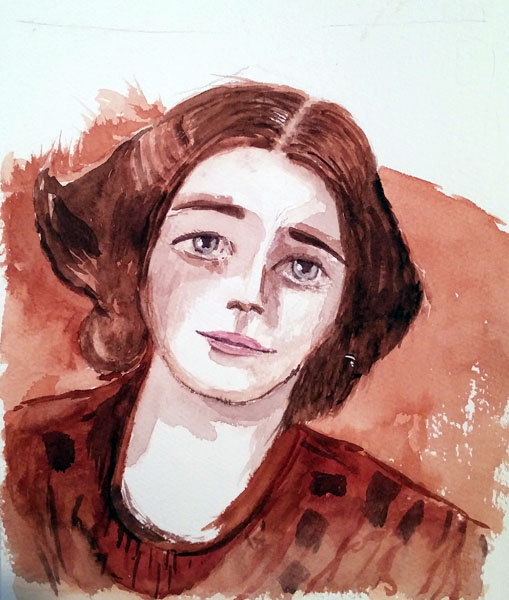 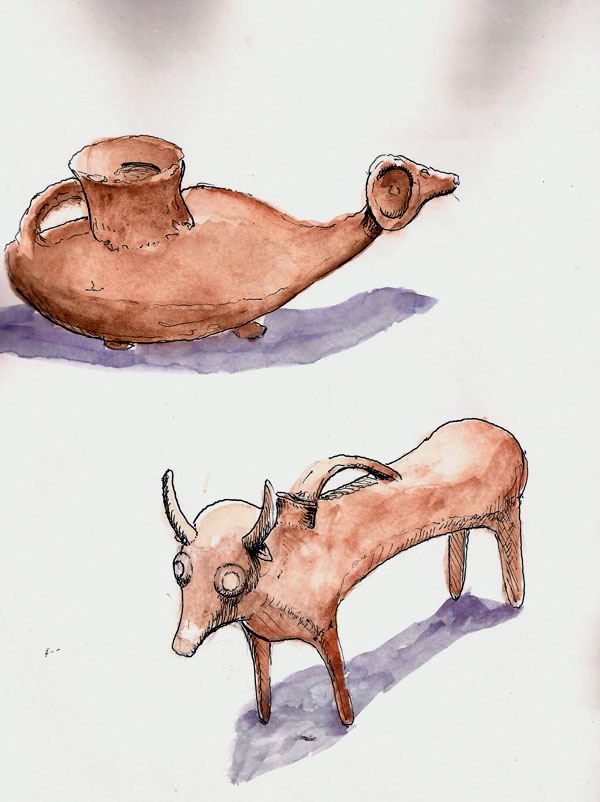 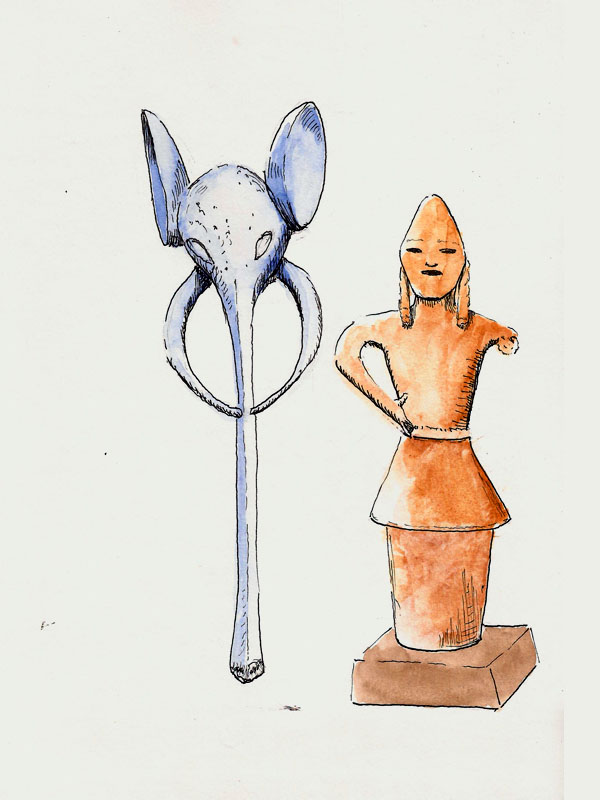 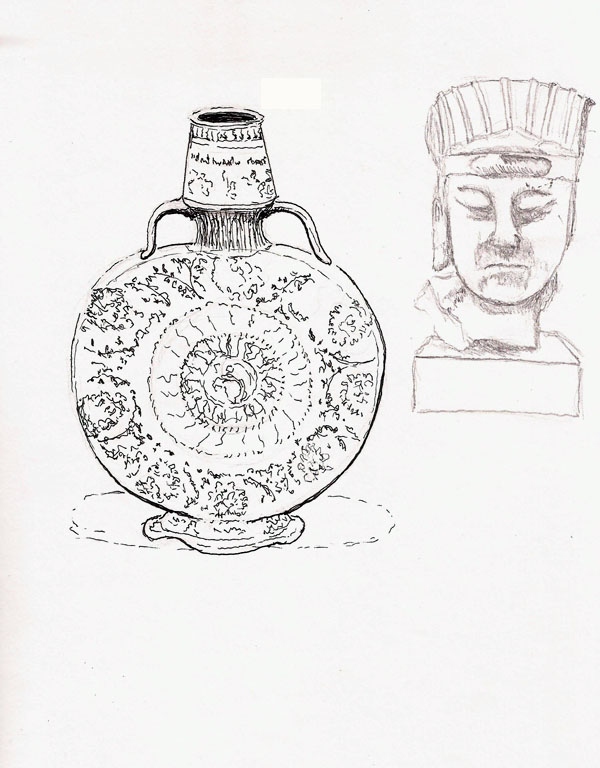